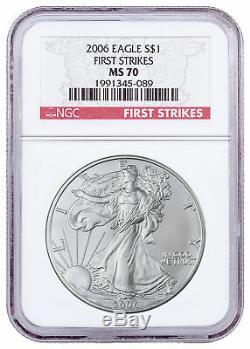 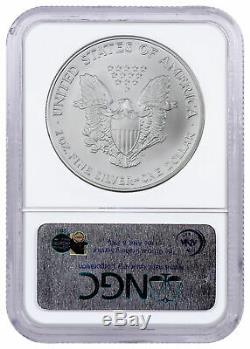 Why order this American 2006 Silver Eagle? The American Silver Eagle, marked its 20th anniversary in 2006, and now you have the chance to own a coin from that historic issue. Since its debut in 1986, the American Silver Eagle has become the favorite bullion coin of collectors around the world. It is easily the world's most collected precious metals coin. This piece was struck on a 1 oz planchet of. 999 fine silver at the Philadelphia Mint. It is part of a mintage of 10,676,522 pieces. Featuring Adolph Weinman's Classic Walking Liberty Design. The coin's obverse design comes from Adolph Weinman's famous Walking Liberty Half Dollar. Liberty is the picture of patriotism as she strides to the left side of the coin draped in the American flag. On her head is a Phrygian cap, which identifies her as a freed slave. She carries laurel and oak branches in her left arm while extending her right hand in front of her above the morning sun, which is emerging from beyond the horizon. Her name, "LIBERTY, " arches over her, while the national motto, "IN GOD WE TRUST, " and date, "2006, " are also inscribed on this face. The reverse bears John Mercanti's adaptation of the Great Seal of the United States, which he specifically created for this series. An eagle guards a union shield under thirteen stars, which represent the original states. In its beak the bird holds a ribbon that bears the inscription "E PLURIBUS UNUM" (From many, one).

The eagle also holds arrows, symbols of America's willingness to defend her values, and an olive branch, which expresses a desire for peace, in its talons. This design is encircled by rim inscriptions that note the coin's country, "UNITED STATES OF AMERICA, " weight, 1 OZ. FINE SILVER, " and face value, "ONE DOLLAR. The experts at Numismatic Guaranty Corporation (NGC) certified that this coin is in perfect condition as seen under 5x magnification by awarding it their highest grade, Mint State 70. They also indicated that it was submitted for grading no more than 30 days after its initial release from the mint by certifying it First Releases.

Don't miss your chance to own this 2006 Silver American Eagle. Heraldic eagle with shield and thirteen five-pointed stars. We cannot make any price adjustments after the sale is complete. Product Photo Policy: MCM attempts to display product images shown on the site as accurately as possible. We take all of our photos in house and due to reflections on the mirrored or proof surfaces of a coin there may appear to be'black' when there is not. If a coin has a color on it at all it will be described as'colorized' in the description or title.

Due to the large inventory we sell, we use stock photos. Serial numbers will vary from the image shown unless specifically stated in the product listing that the item pictured is the item you will receive. INTERNATIONAL ORDERS POLICY: We are accepting international orders from select countries. These charges are the customer's responsibility.

However, we cannot guarantee this due to the volume of orders we process each day. Beyond the 30-day return period, Company is under no obligation to accept return of any product, but may in its discretion do so pursuant to this policy, for up to one year from the invoice date. ModernCoinMart (MCM) was launched in 2004 and quickly set the standards for online sales of bullion, US coins and world coins.

This listing is currently undergoing maintenance, we apologise for any inconvenience caused. The item "2006 1 oz Silver American Eagle $1 NGC MS70 FS First Strikes SKU20720" is in sale since Thursday, December 19, 2019. This item is in the category "Coins & Paper Money\Bullion\Silver\Coins". The seller is "mcm" and is located in Sarasota, Florida.